Tekniker has developed and validated a proximity detection system based on artificial intelligence that can measure the distance between a robot and the different body parts of a person to guarantee the latter’s safety within the framework of the Prodetect project. 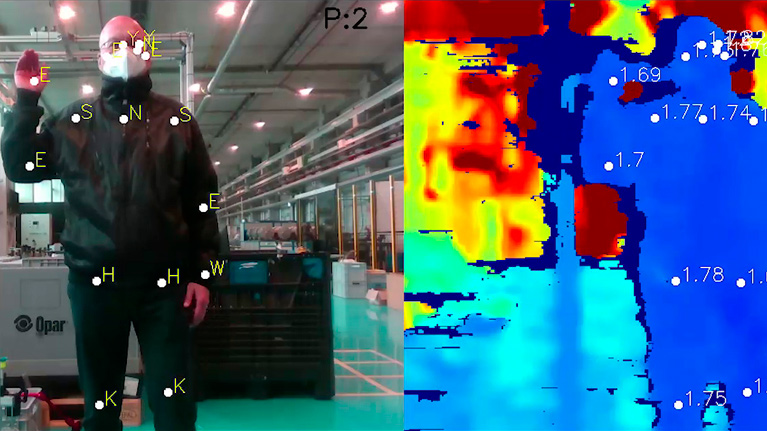 The deployment of collaborative robots in the industry has become a reality. Robots have been gradually incorporated to specific workplaces where people also present to perform a number of tasks involving, for instance, packaging, part assemblages or inspections, among other operations.

In an environment where people and robots share the same space, it is essential to ensure that stringent safety requirements are met wherever persons and robots work together and with regard to robotic systems in operation.

In recent years, significant improvements have been made in terms of person detection and monitoring systems to achieve a suitable degree of supervision and safety for workers. It is within this context that the Prodetect project has been carried out under the framework of the European COVR programme in which Tekniker, a member of the Basque Research and Technology Alliance (BRTA) has also been involved.

More specifically, the technology centre has developed a proximity detection system, hereinafter called PDS in its English acronym, that can measure the minimum relative distance between a robot and nearby objects based on the information supplied by a viewing system in the form of a dot cloud.

Generally speaking, the Prodetect project related to PDS developed by Tekniker has focused on a Human Awareness Proximity Detection System (HA-PDS). These developments were based on a model that detects body parts and the system has been integrated into a small-sized hardware.

The solution detects persons standing close to robots in shared spaces to stop the latter before contact occurs.

Performance evaluations of the entire HA-PDS system have required, on the one hand, accuracy assessments when measuring the distance between the robot and body parts and, on the other, an evaluation on the degree to which artificial intelligence is capable of detecting body parts.
Tests were validated in three relevant industrial scenarios. The system was first developed in the logistics sector by using a single-arm collaborative robot in picking operations. Secondly, in the area of manufacturing a double-arm collaborative robot for assembly operations was used. And, lastly, in the aeronautical sector, a mobile manipulator for inspection of aeronautical components.

In addition to the results obtained, the project also offers an interesting vision of how artificial intelligence can be used as a safety component and provides a number of guidelines on key factors that must be taken into account to develop a robust body parts detection system.