4.0 diagnostics for hydraulic systems in aeronautics

Tekniker has developed a prototype to perform on-site condition analyses for hydraulic fluids used on aircraft subsystems such as landing gear or flaps. 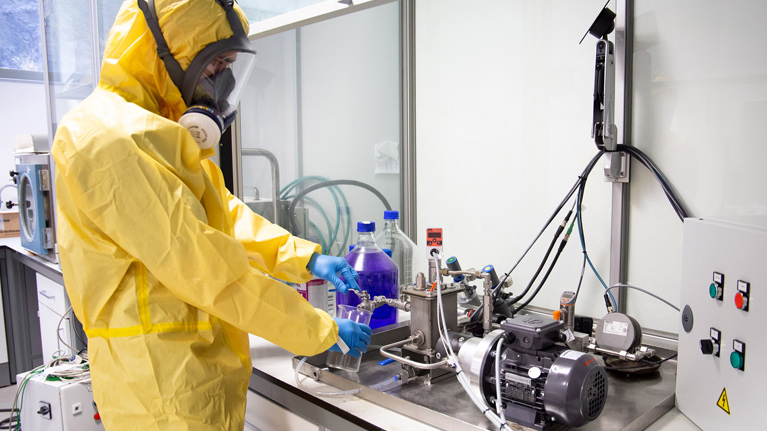 Maintenance operations carried out to optimise the condition of hydraulic and electrohydraulic systems and extend their life cycles as much as possible are crucial to enhance safety and efficiency in the aeronautical sector.

Tekniker has developed an innovative prototype to perform on-site analyses for fluids and actuators used by hydraulic systems aboard aircraft which are used to operate subsystems such as landing gear or flaps.

More specifically, researchers at the technology centre have created a standalone portable test bench equipped with several commercial sensors to monitor physical-chemical parameters such as density, temperature, viscosity, the percentage of degradation or the presence of external contaminating particles.

Based on the information provided by the test bench, the research team has developed an algorithm that diagnoses the condition of the fluids and the actuator as a function of data compiled by the sensors and applies analytical technologies based on Machine Learning.

Alberto Villar Tekniker’s researcher explains that "it will be possible to use the information obtained by the sensors to generate a condition diagnosis not only for the fluid itself but also for the hydraulic system thanks to new monitoring algorithms".

It only takes the test bench three minutes to determine the condition of a hydraulic fluid whilst routine maintenance is carried out when a plane is on the ground. This on-site analysis speeds up the process and facilitates decision making should it become necessary to replace the fluid. The procedure supplements laboratory analytics, that are more exhaustive and take longer. The Tekniker researchers also explain that "thanks to this system, operators will immediately be able to decide whether fluids must be replaced or estimate their remaining life cycle to save a significant amount of time".

Another benefit associated with this system is that it reduces operator exposure to fluids, a highly significant factor considering their degree of toxicity.

The diagnostic solution was initially tested under controlled conditions at Tekniker’s laboratories and later validated under real operating conditions at Element’s facilities.

It will be possible apply all the knowledge acquired throughout the design stage to other sectors such as the energy business in order to further safety and reduce maintenance costs.

The European initiative Fluider, funded by the European Clean Sky programme, in which Tekniker, Safran Landing Systems and Element Sevilla were involved, ended in 2021.

This project has received funding from the Clean Sky 2 Joint Undertaking under European Union´s Horizon 2020 research and innovation programme under grant agreement n° 831998.